From Biblical Weblinks
Jump to navigationJump to search 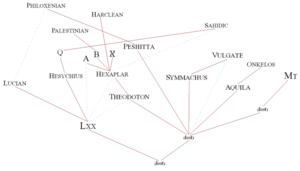 Thousands of ancient copies of the New Testament have survived. This enviable situation (which is unparalleled in other ancient literature) has enabled scholars to study copying errors in detail. Three main types of text have resulted from these studies, though their differences are minor.

The Textus Receptus is based on the first edition of the Greek text prepared by Erasmus, before the earliest manuscripts had been discovered. It forms the basis of the earliest English Bibles, notably the King James Bible. It is still used by many because it contains the long reading of 1 John 5.7 which is first found in a Greek manuscript penned a short time before Erasmus published his edition - it was said to have been prepared especially for this purpose!

Most scholars use the text of Nestle & Aland which gives preference to the oldest manuscripts (mainly Vaticanus B and Sinaiticus) and to the papyri from the first three centuries. Decisions about which reading was original is based on which one was most likely to cause later scribes to produce the others. This is published by the American Bible Society ("NA27" - ie Nestle-Aland, 27th ed.) & the United Bible Society (UBS4). Recent (NA26, NA27, UBS3, UBS4) editions have virtually identical texts and differ only in their critical apparatus, but NA28 (rationale, text) incorporates some new readings from the Editio Critica Maior. This text is basically similar to earlier editions by Westcott & Hort, Tischendorf and Weiss, who all followed broadly similar principles.

English Guide to the Various Readings of the Greek New Testament

Readings of Eds, not MSS

theory and history of textual criticism

(all of the above) major eds with variants, linked to grammar and very good lexicons + ECF allusions - scholar's heaven!

Translation of the Book of Acts in Codex Bezae

marked with differences to TR

A comprehensive critical apparatus of the NT, starting with Luke and John

manuscripts with the invitation to get involved in the project

show two Greek texts side by side with lexical & morphology helps

"This site is devoted to the study of Greek New Testament manuscripts."

Other Ancient Translations (with English)

All Targums in Aramaic: pointed or translitterated

Psalms & Megillot trans by E M Cook and others: English only

NT trans by Murdoch: English with parallel Syriac English only

NT trans by Etheridge: English only

OT trans by Lamsa: English only

Samaritan: Samaritan Pentateuch in Hebrew Squarescript (a long download of the full text)

Many texts are available in commercial software

The Ancient Versions of Scripture